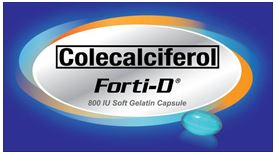 An expert in the field of occupational medicine has revealed that an increasing number of office workers in Metro Manila are becoming vitamin D-deficient because of their lifestyle habits.

In a presentation during the 36th annual national convention of the Philippine College of Occupational Medicine (PCOM) with the theme “Moving Forward to Healthy Workplaces”, Dr. Marilou Renales said that based on a study that has been ongoing since 2013, 3 out of 5 Filipinos tested are vitamin D-deficient.

“The results of a voluntary blood testing performed among 369 randomly selected Metro Manila office workers revealed that 58% were vitamin D-deficient while 30% were shown to have insufficient levels of vitamin D,” Dr. Renales said.

The PCOM director added that vitamin D deficiency is a contributing factor to one’s development of chronic diseases such as cancer, hypertension, cardiovascular disease and diabetes.

Cases of vitamin D deficiency in the country have risen in the past couple of years owing to the current lifestyle that most Filipinos have. Vitamin D is produced naturally through adequate sun exposure and given that most office workers are not exposed to as much sunlight as they need to be, they face a much pronounced risk of suffering from the condition.

“Apart from staying indoors for most parts of the day, habitually wearing long-sleeved clothing and slacks or pants, using too much sunscreen, and eating barely enough of vitamin D-rich foods, environmental factors are also at play,” Dr. Renales said.

In the same presentation, Dr. Alejandro Diaz of the Philippine Neurological Association also disclosed that typical Filipinos’ naturally tan complexion, given the moderate to high levels of melanin in their skin, is also a factor in vitamin-D deficiency.

“Melanin, while serving as a protective barrier for the skin against ultraviolet (UV) light, also works to block the sun’s rays, which is needed to activate vitamin D in the body. Studies have proven that there is a direct correlation between melanin levels and vitamin D production, with melanin affecting the skin’s ability to synthesize vitamin D. Thus the darker the skin, the less vitamin D is produced,” Dr. Diaz said.

As a preventive measure against vitamin D deficiency, doctors have endorsed the daily intake of vitamin D supplements.

“Taking one capsule of Forti-D every day helps reduce the risk of getting chronic diseases by unlocking the proper function of organs typically affected by such illnesses,” said Alex Panlilio, Unilab VP for consumer health.

The first of its kind vitamin supplement available for purchase per piece, Forti-D is sold at P6.50 (SRP) in leading drugstores nationwide.

Make this a Holiday to Remember with PTC Lifestyle 

Filipino brand, PTC Lifestyle, gives you the perfect Holiday celebration with a plethora of topnotch but affordable kitchen and home appliances to gift, not just to friends and loved ones but especially to your own homes to add flair to the year’s most-awaited festivities. It’s that time of the year again! Let’s be honest, the […]